Mining Cryptocurrency With A 470 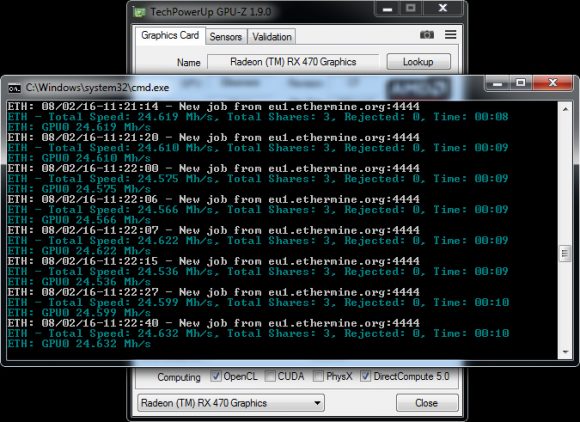 The new AMD Radeon RX 470 GPUs are supposed to start hitting the market in a few days and since their bigger brother – the RX 480 has turned out to be a good choice for Ethereum mining, although it did not perform that good in other algorithms, people are interested in how well the RX 470 does.

We got a tip from a reader that apparently has an RX 470 8GB video card in his hands already and along with the information that was sent there was also a screenshot included to show the Ethereum mining performance he is getting.

The hashrate at stock settings for the GPU shows 24.5-24.6 MHS mining with Claymore’s Dual Miner (only for ETH) and this is pretty much what the Radeon RX 480 does with the default settings.

So it seems that the slightly lower number of Stream Processors in the RX 470 did not result is drop of hashrate at least for mining Ethereum (ETH) as it is a more memory intensive algorithm, do note however that it should affect performance in other more GPU-intensive algorithms. Unfortunately we don’t yet have any information regarding the performance of the RX 470 in other algorithms, but we should in a couple of days when we manage to get our hands on the new AMD video cards.

Do note however that there is a catch in this result being the same as on Radeon RX 480, the reason for the same Ethereum mining hashrate hides in the video memory.

How to select the best GPUs for mining?

As we mentioned the results shown on the screenshot are from an 8 GB model of RX 480 that apparently has the video memory running at 8 GHz (the same as on RX 480 8GB models), so the same performance is to be expected.

There will however be AMD Radeon RX 470 GPUs with 4GB of video memory where the operating frequency could vary between 6.6 GHz and 7 GHz and these should have lower performance for Ethereum.

The expected hashrate in mining Ethereum is more like around 20 MHS for the 6.6 GHz video memory and about 21 MHS for the 7 GHz models.

Don’t be in a hurry to do so, because while most RX 480 cards with 8 GHz video memory could easily hit 8.8 GHz or 9 GHz with overclock it is highly likely that the RX 470 cards could be more limited in their overclock capabilities. Another thing to note is the price difference between the RX 470 and RX 480 for the 8GB models with 8 GHz video memory, if it is not big enough the 480 could remain the better choice.