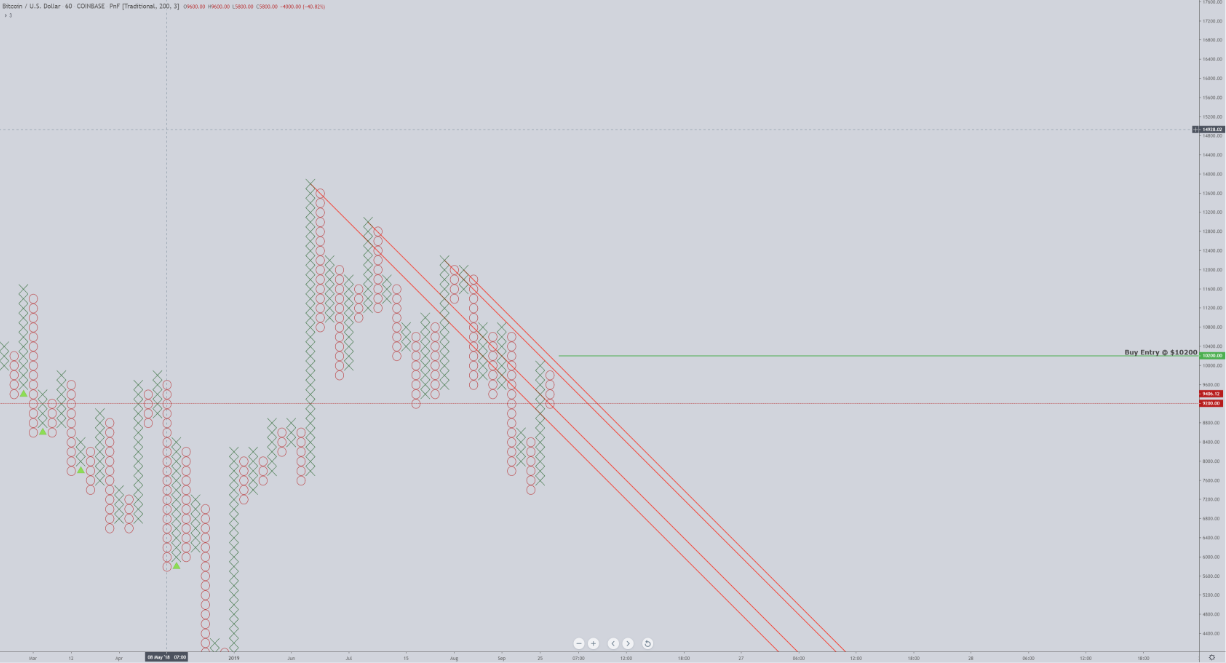 If you’ve looked at any of my past articles identifying entry zones for , then this chart may look familiar. 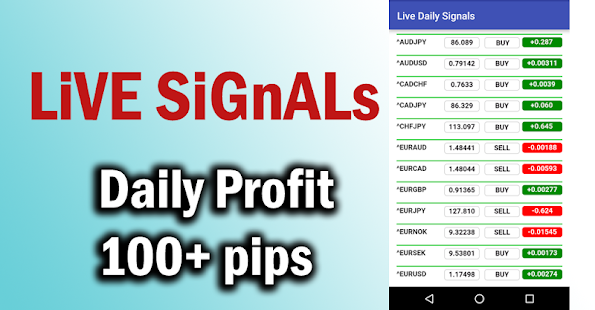 It may look familiar because it remains unchanged. The fact that the chart remains unchanged displays one of the strengths of Point & Figure analysis as well as a source of frustration for traders who are used to the factor of time in their trading.

The current trend for Bitcoin is bearish, but it is very close to changing. If Bitcoin moves back up to $10,000, then this would create a double top right against the dominant objective downtrend angle. Entry at $10,200 would be extremely bullish by breaking both the downtrend line and the double top.

We can also identify a profit target using the vertical profit target method, as described in Jeremy du Plessis’ book, The Definite Guide to Point and Figure.

The formula is straightforward. We take the number of Xs in the previous column of Xs and multiply it by the box size ($200). 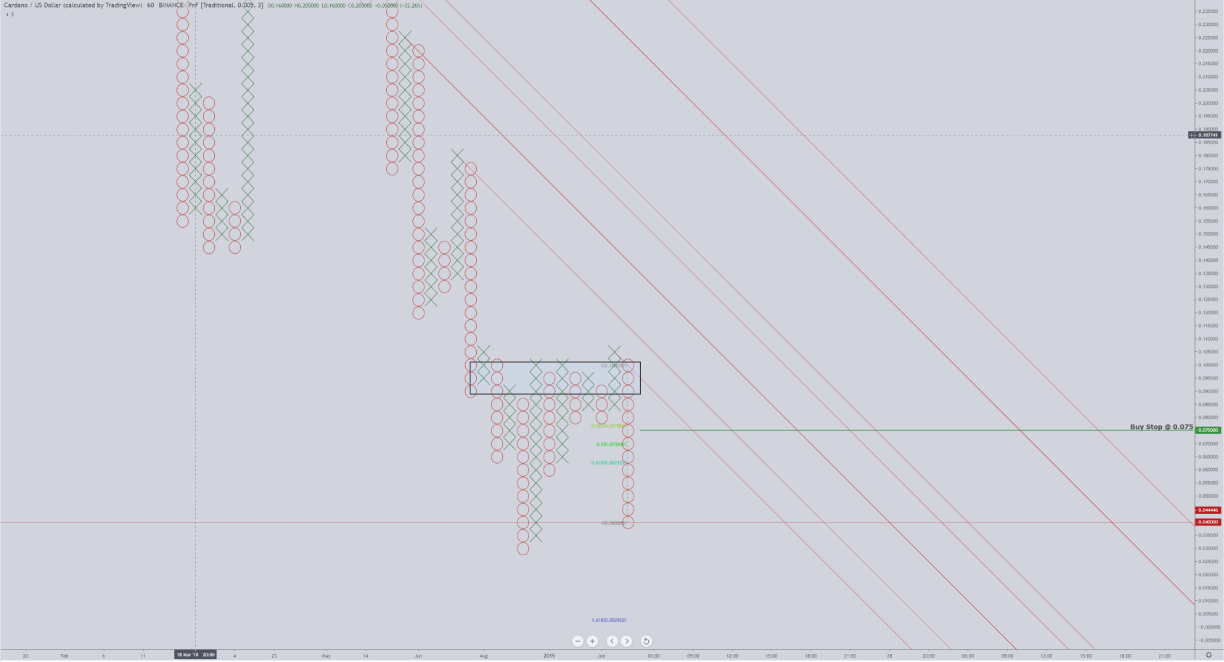 ’s chart is one heck of an ugly chart. The current column of Os is what I would call a ‘Pole’ pattern (also identified in DuPlessis’ work).

A Pole Pattern is often an excellent trading opportunity and can signify the end of a swing. The entry here is a straightforward (but aggressive) entry.

On a pole trade, an entry is taken after the first box above the 50% range of the column has been breached. On Cardano’s chart, the 50% level is at $0.07.

The entry would then be when price moves to the next box above, which would be at $0.075.

Can we predict and project a profit target from this range?

Yes. We can identify a profit target using a horizontal counting method. First, we need to establish a range. This is done by finding two large columns. The rectangle on the screen highlights the 13 bars that make up this horizontal range.

Next, we multiply the range by the box size. We then add that value to the lowest O, and that will give us our profit target. In a nutshell, we’re doing the same thing we do with a vertical count, except we’re counting columns across a range of reversals and adding to the low of the range.

For Cardano, that profit target would be at $0.225. That’s more than 5x more than the present value of Cardano, but I think people can establish a more reasonable objective if we recover from this value area. 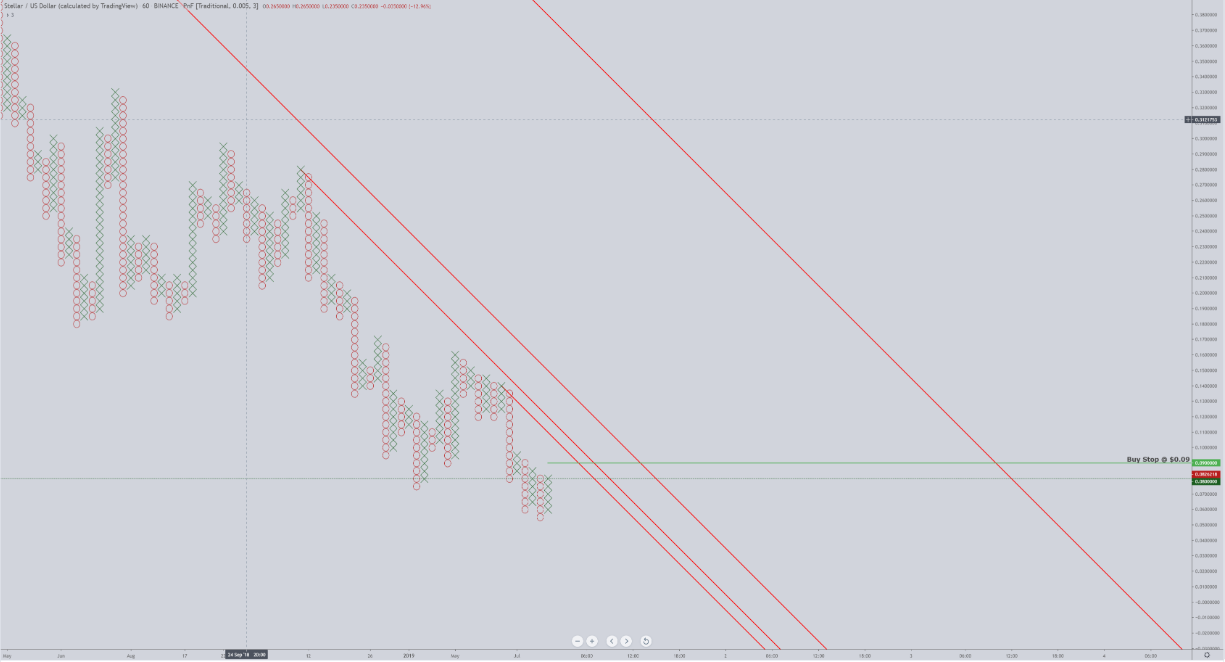 has easily been one of the most prominent performers over the past few trading days.

It’s moved over +20%, and it is approaching its closest buy zone. There is a double top that forms when Stellar moves up to $0.085, so the entry would be at a break of that double top with an entry at $0.09.

The proximity of this entry to the downtrend angles does cause me to have some concern, but given the bullish nature of the broader market, these angles could very easily and very quickly be made moot. 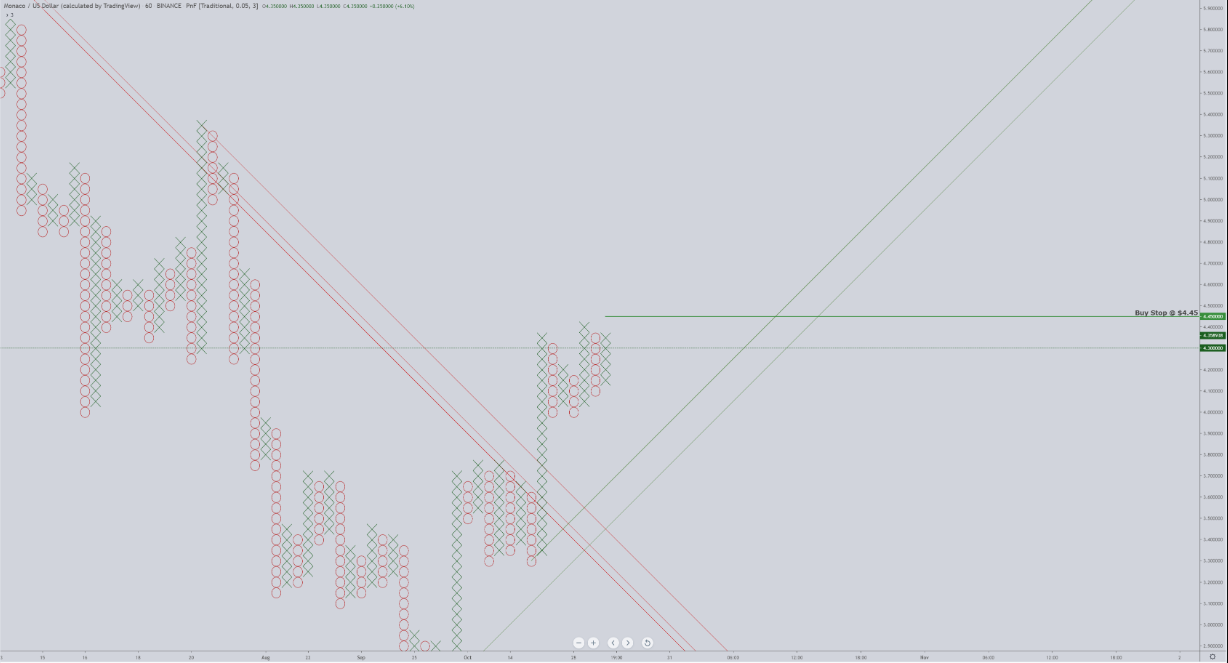 If you haven’t been paying attention to the app or it’s two tokens, you’ve been missing out.

The CRO token can be staked for a crazy 12% per annum return directly from their app, and staking MCO gives you some excellent options with their card.

MCO is also one of the best performing altcoins out there and one of the few USD pairs that are in a bull market. It is very close to a bullish entry if MCO can break the double top @ $4.40. The entry would be at $4.45. A profit target utilizing the vertical count method points to the $5.30 value area. 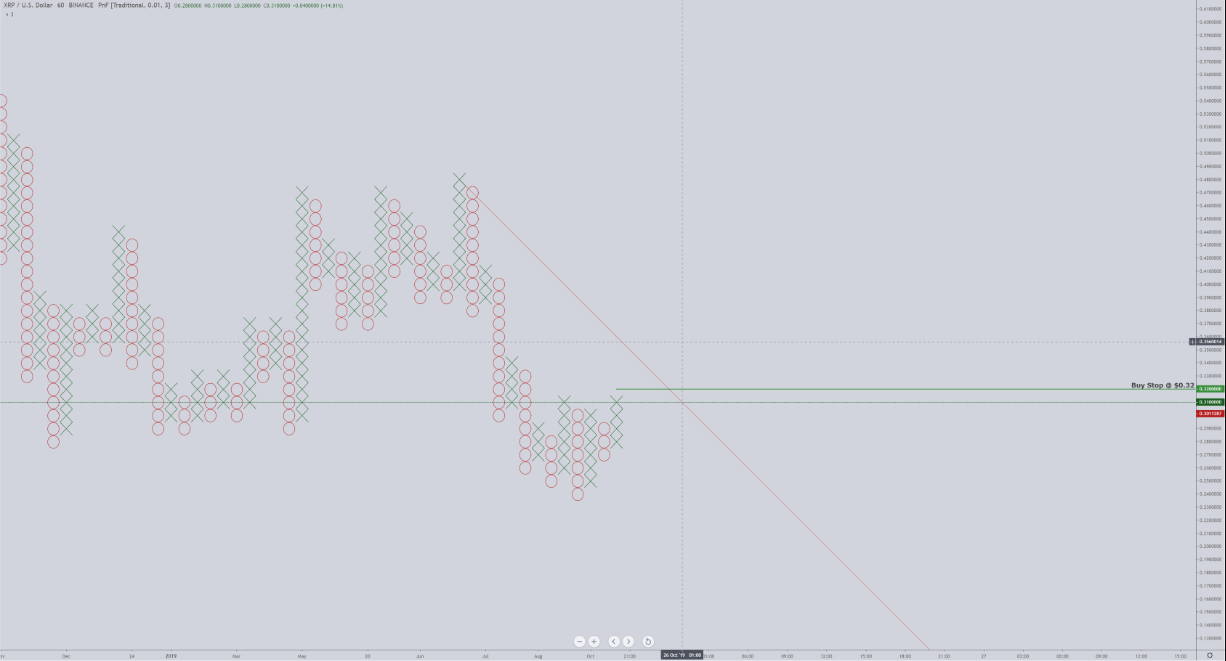 Not many Fed meetings ago, Chairman Powell discussed the beginnings of a private/public relationship that will work towards immediate settlements instead of current multi-day settlement.

This is one of many death knells for , but that doesn’t mean Ripple can’t be traded. Ripple has one thing going for it that many altcoins don’t: masses of cult-like fans. It’s more like a penny-stock with legions of fans on Stocktwits than an investment vehicle (think GBSN circa 2014–2015). There is a split double top on Ripple’s Point & Figure chart at $0.31. The entry would be at $0.32.

The dominant bear trend angle is just ahead, but given the impending turnaround crypto market-wide, that trendline may be irrelevant.